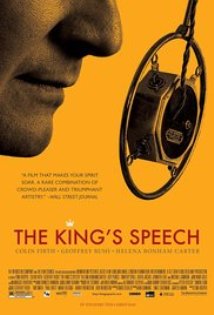 In the past, all a King had to do was look respectable in uniform and not fall off his horse. Now we must invade people’s homes and ingratiate ourselves with them. This family’s been reduced to those lowest, basest of all creatures. We’ve become actors!Dodele filmskih nagrada za 2011. godinu je obeležila ova istorijska drama … Read more The King’s Speech (2010)

Scroll back to top